Hi Folks,
We would like to take this opportunity to wish you all a Merry Christmas and let us hope that the situation improves rapidly in 2021 and that we can all get back to some sort of normality.
We haven’t been able to gig since August and future touring is impossible to organise because nobody knows when the situation will change.
On a more positive note we finished our new album, Train’s a Coming, which has head several very positive reviews.
If you would like to hear excerpts from the album, or watch a couple of videos of us in the process of recording the songs, please click on the links below

Below is a live video of us performing our song Good Time which is also on the album
https://youtu.be/kLTrsGRUWtU

We are also pleased to announce that UK blues magazine, Blues in Britain, interviewed us and reviewed the album for their October edition. Please find the articles below

Rag Mama Rag: Train`s A Comin`
Rag Mama Rag return with an excellent new offering, with their mix of original songs and tasty blues covers, not to mention the odd blues take on artists like Hank Williams. Recorded in France, this new album offers a very generous fifteen tracks. Rag Mama Rag are Ashley Dow, on guitar, National and Dobro resonators guitars, Weissenborn lap steel and of course the vocals and Deborah taking on the harmonica, washboard and percussion duties along with backing vocals.
Among the covers is a superb rendition of Ry Cooder`s `Across The Bordline` a slide guitarists dream track and Ashley does a wonderful take on this often recorded song. Pink Anderson`s `Greasy Greens`. Hank Williams` `I`m So Lonesome I Could Cry` and Big Bill Broonzy`s `Key To The Highway` all feature as does `Oh Babe It Ain`t No Lie` originally sung By Elizabeth Cotton, and sung by Deborah with Ashley joining her on the chorus, the playing here is just stunning, hit the replay button. The Gospel song` Let Your Light Shine On Me` is also covered. There`s a slice of ragtime on `Good Time` with guitar and washboard taking us back to the twenties. For `They Fooled Me` Ashley sings of the promises of a better life, the land of milk and honey, but he ain`t seen none of it yet! `Shake That Tree` is another slice of good time ragtime.
This is an album you just have to hear for yourself, if you like down home well played and uplifting blues, then this definitely for you. Recommended listening to all blues fans.

One of the delights during this lockdown period was the number of online gigs that we could enjoy. One of these, thanks to The Cotswold Distillery, was a chance to enjoy the music of Rag Mama Rag, or to use their real names, Ashley & Deborah Dow, born in the UK but residents In France for so many years now.
They do regularly tour here and would have already been here but for travel restrictions. It was a good time to catch up with them at home and hear all about their new album release Train`s A Comin`.
They`ve been performing their arrangements of acoustic based blues for nearly thirty years and recorded a string of well received and hugely enjoyable albums, now there is a new one available.
Their previous albums give you a great idea of what their music offers with titles like Shake It One More Time, Struttin` and Strollin` and That`ll Never Happen No More, Train`s A Comin` was produced and recorded in their own Deep Valley Studio in the department of the Lot and released in France on their own label, another in-house business.
The best time to get to chat to them and make us all more aware of their music, was after the online lockdown gig. We also heard about upcoming hopeful tours in the UK and the new album Train`s A Comin` featuring both classic blues and new original songs.
Ashley opened things by saying he got into playing country style blues and that in turn inspired him to play guitar seriously. In fact, previous to discovering this style of blues, as a beginner, he remembers his first guitar being a nylon strung classical guitar, and being left-handed, a right-handed model with the the strings changed around, “as a child I grew up listening to 60`s and 70`s music so my first experience with playing was with a nylon strung guitar and The Beatles Complete Songbook which was for piano anyway so all the songs were in unfriendly keys, Eb, Bb, Ab, and it didn`t take long to figure out that these songs could be transposed and made easier to play on the guitar”. Then by the age of twelve and on hearing a vinyl album of Mississippi John Hurt, who`s playing totally fascinated this young teenager, “especially as he was playing a bass line and a syncopated melody at the same time. In fact, John Hurt has inspired so many Delta players over the years”.
Ashley was hooked on that sound and had to figure out for himself how it was done, what was this fingerpicking blues guitar? As he says himself, it took time and a lot of practice to figure it out and to be able to have the thumb and fingers working independently “but once this was achieved, it opened up a whole lot of new possibilities.
I eventually took some lessons with an American finger-style legend Duck Baker, who corrected my bad technique and opened
my eyes to a whole lot of other styles of music, including blues, jazz and Irish music”. 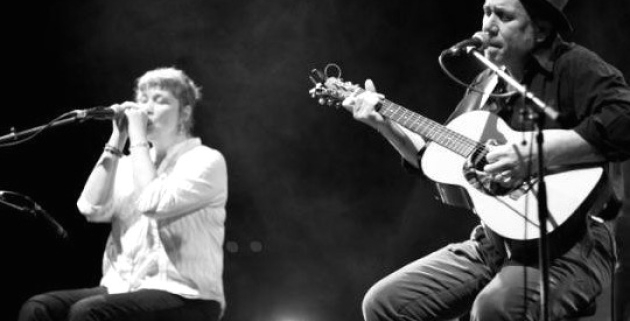 Thanks to folk like Ashley and Deborah the wonderful Delta blues is kept alive and well, along with their own songs and tow tapping ragtime

After months of hard work in the studio, we are happy to release our new album Train’s a Coming..

There are no upcoming events at this time.